Recent Posts from the Mumena Team

“… neither shall ye defile yourselves with any manner of creeping thing that creepeth upon the earth.”  Leviticus 11:44  KJV

Our apprenticeship team work skills were put to the test recently when Whitney came from our boys room and mentioned that she had just seen the largest wall spider in her life.  As the old missionary, I condescendingly told her that “wall spiders are our friends”.  That is missionary speak for “Whitney, get a grip.”  However, when Noah & Bryson began “ooing and ahing”, I thought that I had better check it out.  To my surprise a King Baboon Tarantula was perched high up on the boys’ bathroom wall.  Now we had a problem.

Surrounded by able bodied apprentices, I felt a bit put upon when they looked to me, the mentor, for the proper response.  Theologically believing that all arachnids are a direct result of the fall of man, I was none too happy about having to demonstrate my superior missionary skills in this particular situation.  Add to this that our “Ag apprentice” (Jason) is also a firm believer in the un-holiness of all spiders, and my back-up troops were thinning.  Taking my favorite fly swatter (steel reinforced with leather covering), Jason helped me up on to the bath room counter top… after which he promptly left the room.  As Sondra mentored Erin on how to give lots of advice from the adjoining room, I approached within striking distance of the tarantula.  Striking it with all of my force, I managed to send the thing flying across the room towards Sondra and Erin.  (Enter Jeremy with his high school football ethic kicking-in.)  Grabbing a 5 gallon bucket, Jeremy managed to catch the beast on the fly – and in one fluid movement, dumped it into the commode.

I don’t remember who flushed – God bless them – as I was struggling with a series of shiver spasms.  Whitney, bless her heart, was desperately trying to suppress her gag reflex.  And as Sondra and Erin struggled with their feelings of “If he had done it correctly, it would NOT have come flying towards us!”, I thought to myself, “What a team!” 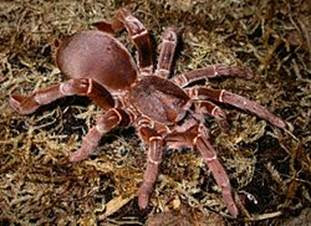